"Spontaneous design, with no prior planning besides the setting of materials and circular automatic movement" 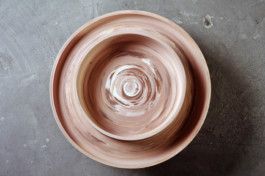 Spontaneous Visual Rhythms exhibit 7 stools and 7 side-tables, each crafted with circular movements and spontaneous design, with no prior planning besides the setting of materials and circular automatic movement. From the same amount of materials the process produces different gradient visualizations, patterns and colors, which emphasize the aesthetic characteristics of an unplanned design. The shape, and the complexity or simplicity, are all formed by affirming less depth of thought, perhaps, and more breadth of it.

Taking Cage’s “Water walk” performance at the TV studio and bringing it to the designer studio turns what was a fully visible performance before the public into a private process hidden from the public. Yet the end result is exposing a rhythmic creation which is interwoven in perception's fleeting formation. “Say when dancing, you don’t aim at a particular spot in the room – that’s the where you should arrive; the whole point of the dancing is the dance. But we don’t see that as something brought by our education into our everyday conduct. We’ve got a system of schooling which gives us a completely different impression.” As Cage’s performance in front of the audience was on the one hand planned but also dependent upon the spur-of-the-moment, the design process conducted in this project was spontaneous and at times impulsive. Touch connected with the sound and the rhythm of the machine to penetrate the material, while engraving its shape and deforming its figure. A multiple circular movement exposed the textures and sounds. The setting in both cases is presence and absence; there is sound and there is silence.

Rhythms can be translated into the ability to apply and utilize the movement to an outer base or source. To create causal nexus between the body, environment and the objects in one scene. Touch defines the work’s visual outcome. At times it is firm, and at times it is soft. As such it serves as a comment to the rhythm of the machine. The designer can imagine what the outcome may be, but he cannot have complete control over it. The free flow type of work dictates a mechanism in which the actions are physically spontaneous, while there’s a general vision of the outcome. Cage set up the stage, but serendipity reigned; the sound produced could be very different from what he expected. I took as a starting point one specific diameter of a circled wooden plate, usually used by the engraver to create very conventional seats, and different colors of clay to create the ceramics – all of which were processed among circular movement. This versatile nature produces different variations of visual rhythm that depend upon chance and cannot be reproduced. The spontaneous approach gives an enhanced expression by the kneading of the clay’s mixture. The visual outcome is not known and barely visible until the fingers let loose and the final result is revealed.

Rhythm, as is seen over the surface, is a memory of the human bodily forces that combined with the machine’s circular movement. It is a byproduct of the changing anatomic pulses created by these two forces. Two rhythms, one systematic and fixed, the other softer, more random and influenced by emotions and feelings, combined on a surface’s material and produced a flow. The rhythm of man and machine is now visualized in a stilled object in which we can see different textures, colors and depths which result in a new, elaborate and developed visual rhythm - a type of music to the eyes.

“So then, in music though, one doesn’t make the end of the composition – the point of the composition. If that was so the best conductors would be those who played fastest. And there would be composers who wrote only finales. People would go to concerts just to hear one crashing chord, because that’s the end.” (The human game by Alan Watts)