"Neomadic presents the integration between East and West, a combination of a carpet and a chair" 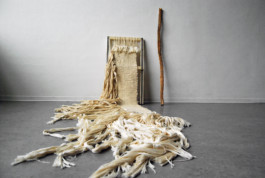 The transition of the Bedouins from nomadic lifestyle to forced sedentisim created hybridization between traditional aspects of the Bedouin culture to western habits. "Neomadic" presents the integration between East and West, a combination of a carpet and a chair.
The concept reacts to the position of the Bedouins nowadays - caught in between the mix of traditional tribal culture and western practices. The weaving process contains the skills and tools that were used by the Bedouin women to weave their tents, but this time around with synthetic materials;
By collecting leftover yarns of a textile factory that produces seats to IKEA, the designer weaved a new seat that holds elements from contrast worlds - East and West, handicraft and manufacturing, nomadic life and sedentary settlers.
2012 Design Academy Eindhoven