"The depth within is the true exterior" 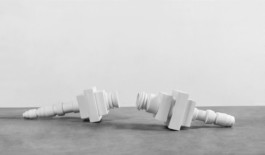 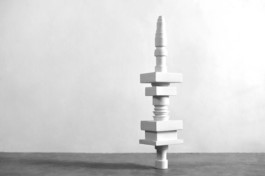 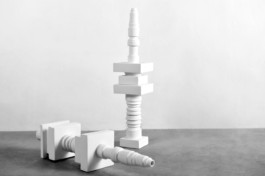 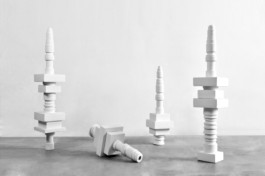 They absorb the wealth of history and the taste of eras. Some marked an important epoch in history and lasted. Others remained only in theory. The different shapes, proportions and visual organization made by humans are the direct outcome of their conceptions, one of which is how to stand the test of time. The need for a surface to last, to be solid, strong , almost everlasting is an integral part of its creation. We apply lacquer on wood, we glaze the ceramic, and we paint the metal. Materials are combined to make a durable outcome that will strengthen the surface and make it its ideal beauty last. The visual material of a surface may stay the same for a long time, but the surface will be exposed to the effects of the weather, our use and sometimes abuse, which can leave their scars indicative of its history.

Surfaces from the ancient world are still with us today, like traces from Greek culture which later influenced the culture of the Roman Empire. Such surfaces, while still present, are different, in color, shape, function and status. The admiration for the pure, white external surface of the ancient sculptures dating from the first and second centuries A.D has been discovered as misplaced. The surface has simply changed with time. These sculptures, once painted in a vivid palette of colors - reds, blues, yellows, and their combination - decorated the marble surface. These colors have faded away over two millennia, in contrast to the white marble that remains the quintessential material of ancient Greek and Roman statuary. The paint faded away from the surface and left a pure iconic visual image which for years has been sanctified and admired. As we know today some parts faded with time, others have survived. All experienced changes, absorbed movement, patterns of motions and touch, but remain silent. What appears to be silent in reality embodies in the metaphysical world an underlying intensity, depth and volume, constantly moving, constantly alive as it triggers our mind.

The changes of material with time can be enhance or hinder. It can lead to idealization or loss of function and interest. The sculptures are exhibited in museums around the world, standing pure and clean on the pedestal which raises them and gives them a heroic monumental importance, in addition to the strong stone which has survived until nowadays. The heroic figures that were standing on the pedestal won a position in which he or she is greatly admired, gaining immortality in a way. The pedestal made them grand in scale and intention.


Is there any value in surfaces which are in the process of disintegration and fragmentation with time? Can the impermanence of a surface, while at the same time everlasting, be highly regarded and recognized with appreciation? The white marble of the Greek statues are composed of recrystallized minerals like Calcite, Dolomite and aragonite. In the recrystallization process of the minerals, a durable, sturdy stone is formed. “Lot's Wife” exhibit The recrystallization of salt that produced a pure mass of salt with a high density, a surface which resembles white marble in appearance. However, the salt surface is not resistant to water and changes with time. The appearance of the surface keeps transforming and outlines different shapes from the original one. The salt surface looks luxurious and invaluable. But the surface lacks durability and deconstructs, leaving traces of what it used to be. What kind of qualities does a passing surface hold?


Since ancient times, humans have been intrigued by the preservation qualities of salt. Salt has drying abilities, it extracts moisture from tissues, creates an environment which prevents bacteria from developing. Salt is used in vast amounts, but is never the star of the show, as a major part of product, always remaining behind the scenes. Salt has always been considered of great worth, cherished and highly esteemed. The ability to preserve and to impede decay, as well as maintain life has given salt a broad metaphorical importance and position. For centuries, salt was one of the most sought-after natural resources in human history, gaining a vital position with the shift to raise animals for meat rather than kill wild ones. Similar to us, animals also need salt. When humans began to domesticate and raise wild animals like sheep and goats for their meat, the industry of salt production was firmly settled. Cattle became a backbone for food, consuming huge quantities of grain and salt. Nowadays, salt has become a resource produced faster than it is consumed. It is so prevalent, inexpensive and easy to obtain that we fail to remember the fact that this mineral was one of the most greatly desired and longed for natural resources in human history.

Salt's ability to preserve and immortalize processes have led to our acknowledgement of it as a passive material, as a servant to immortalize others. Isn't it the will of any object or material to be elevated to a level which is respectful? Standing tall and strong on the pedestal? What is the missing part when you see only the pedestal standing on its own?

In this project I chose to perforate the pedestal, pouring salt into it. Combining clay and salt, some of the objects were fired to a high degree to form a strong material, which is water resistant and complete. Other objects are made from salt and clay that were fired separately, and then combined. In the latter combination, as the salt was peeled, the ceramic core is discovered. Its usage was changed, revealing the notion of times. The person using it undergoes the same processes as did the object. A memorial deconstruction of the product reflects on the person who uses that object and reconstructs a new treatment, gesture and form.

My pedestal is transformed to a series of vessels. Its purpose is to contain instead of exhibit. No longer as a formal classic stand; a new meaning is poured into it, invisible, yet present. Whether full or empty, within or not, burned separately from the salt or together, the visible surface on top is emptied and our perspective and focus is derived to what is inside the pedestal.

This process is the creation of a system of vessels which reconstructs and reassembles to form a new pedestal, with new functions and new meanings from those which history has already witnessed. The monument exhibits a new function capturing other values, meanings, tastes, which all combined reveal the object's depths.

By unveiling the curtain of the body inside it, the new object gives the spectator an opportunity, a glimpse, to what is the real potential of salt as an unhidden part of the object, of the world, of the human environment; an unhidden depth, which is beyond the seen. Depth is in the silence, in what’s molded within. Depth is the true content of materials, their experiences in the passage of time. The depth within is the true exterior. 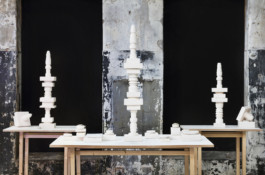