“In a way, the earth became my town and I roamed - digitally and physically on the move - working with the flow of materials beyond borders, adjusting and joining all together at a meeting point in my mind" ENP 2018 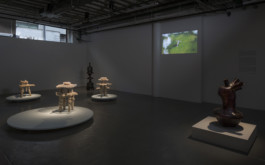 You might think that the Dead Sea would be impervious to environmental damage. After all, it’s already inert – scarcely a living thing in it. But as it turns out, this body of water is remarkably fragile. Much of the flow into the sea has been diverted into regional use, resulting in gradual lowering of water levels, a process further worsened by climate change. Among the results has been a proliferation of sinkholes around the shoreline, at epic scale – more than 6000 over the past twenty-five years, according to one report. Nearby architecture, farmland and roads have been swallowed willy-nilly into the earth.

Given the Dead Sea’s location, along the border between Israel and Jordan, it’s tempting to frame this ecological carnage in Biblical terms: the parable of Lot’s Wife; conquered cities covered with salt, cursed never to rise again. But for the Israeli-born designer Erez Nevi Pana, this story is primarily about the present, and the future. He understands the Dead Sea as a precious wonder of nature, and some years ago, decided to use it as the generative wellspring of his work.

His research, conducted originally when he was a student at the Design Academy Eindhoven, has led to a series of objects that feel more grown than made. They are realized by depositing forms under the water surface and allowing salt crystallization to take place over weeks and months. It is a collaboration with nature. A note of savage irony is provided by the fact that Nevi Pana does this at a geographical location that is quite literally “the lowest point on earth,” a metaphorical comment, perhaps, on where we currently stand in our relationship to the climate.

In this desolate place, Nevi Pana summons objects of great beauty. In the past, he has used salt to encrust vessels of clay: two primordial materials in combination. He has also created architectural building materials – glittering white tiles of layered, melted salt that he semi-jokingly calls “marble for the poor.” The most recent works in the series, though, are revelations. They are functional furniture forms, carpentered in an improvisatory manner, lined with fibrous loofah, and then submerged. The loofah absorbs the salt like a sponge, creating a deep surface that seems at once ancient and futuristic, tough and delicate.

This same set of convictions lies behind his new series of basketry, wittily entitled Wasted. Each is a negative image of garbage. The process is simple to describe, if challenging to actually execute. Nevi Pana traveled to India and saved all of his personal trash for a set period of time, initially simply because he did not want it to end up in a local landfill. Quickly he realized he had too much to take back with him to Israel, so he decided to put it to work, using it as an armature for the construction of the baskets: packaging, water bottles, anything left from his daily life. He entrusted the actual weaving to a team of artisans in the northern part of the country, who were deeply skilled in creating volumes out of bamboo, but had never tried to fashion such irregular volumes before. In an exchange that Nevi Pana describes as “a beautiful dialogue,” he shared his knowledge of mold-making with them, and they shared their basket-making techniques with him. Finally, in a further skewing of the traditional technique, he added a glaze of sorts, visually analogous to that on a ceramic, but achieved through the application of a liquid waste material from the Indian cashew nut processing industry.

Nevi Pana’s third body of current work is equally driven by his rigorous moral stance. Most people are completely unaware that worms are killed (boiled alive, in fact) in the process of harvesting silk fibers. Nevi Pana has adopted a craft-intensive approach known as “peace silk” that has been developed in India according to the principle of ahimsa (non-violence toward all living things). The fibers are gathered after the pupae has exited its cocoon and spread their wings. This process is enacted on trees, using the natural habits of the silkworms; but to emphasize his use of this unusual alternative process, Nevi Pana has integrated unraveled baskets of the kind typically used in silk cultivation into his woven hangings. The hangings suggest an ancient time, far from our own – and perhaps too, given the reality of climate change, a time that we will come to once again.

What is most exciting about Nevi Pana’s work is not its ethical worthiness; it’s that it fulfills the poetic and psychological need of all design, in speaking to the circumstances we share. His solutions, on their own, will not stave off ecological disaster. But they do give us a sense of what it would look like, and feel like, if we were to commit to making the earth whole again: to truly embrace the reality of our surroundings.